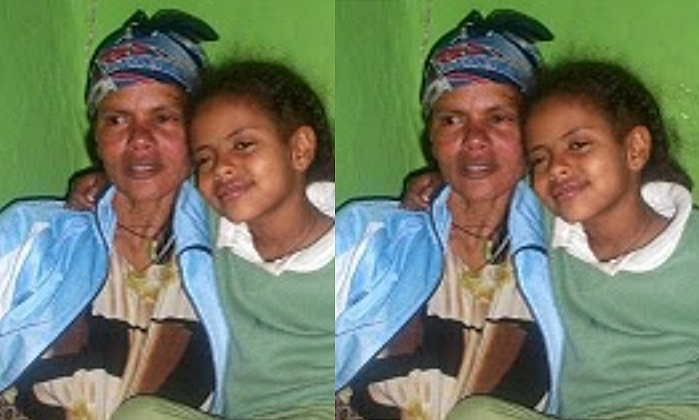 Workay’s Story Of Her Life In The “City Of Opportunity”

Workay was born 35 years ago in the village of Gatu, about 260 km from Addis Ababa. She only has use of one of her legs, the other was crippled in childhood, most likely by polio. There’s no way to know, of course. Workay can’t remember a life where she could walk.

The Great Famine of 1984-1985 would have swept through Gatu when Workay was nine or ten years old. Eight million Ethiopians were affected, one million died. Workay had a daughter named Adist sometime in her middle teens.

Although the famine passed, life in Gatu became more and more difficult. Workay came to Addis, the “city of opportunity” when she was 24 years old to earn a living for them both by the only means she felt she could: as a prostitute. And so she became sick with the illness that, at the time, had only one name: aminmina, the “slim disease.” Later on it would come to be known as human immunodeficiency virus, HIV.

Six years ago she had another daughter, Bazawit. She doesn’t know who Bazawit’s father was, but she does know that Bazawit does not have HIV. That’s one blessing she’s thankful for every day.

The other is Fresh and Green. Muday heard about Workay and Bazawit from neighborhood friends and invited them into the Fresh and Green “family.” Bazawit started school and is now a thriving first-grader.

Workay joined the Mothers’ Cooperative, and crocheted shawls that were sold at the store. She earned enough to feed herself and afford rent in a small apartment in the neighborhood. Most importantly, her guaranteed nutrition ensured she could receive the antiretroviral (ARV) medication that saved her life.

Unfortunately, Workay’s HIV was fairly advanced before she started on the ARVs. During our visit, Muday took us to visit her. When volunteers are in town, Muday will “suggest” a vist when someone is in need. In December 2009, Workay became too ill to continue to work at the Mothers’ Cooperative. During the first week of April 2010, Workay went blind.

We walked, thorugh a torrential downpour, about half a mile from the school to Workay’s and Bazawit’s apartment. It’s a very small room painted a cheery lime green, with one electric lightbulb, a bed and a chair. A large poster of the Blessed Mother watches over Workay’s bed.

There were eleven of us that day: six volunteers, Muday, Workay and Bazawit, and Workay’s friend Alamsai, and her daughter Titthena. Alamsai has been keeping Workay alive, bringing food every day – an almost unimaginable sacrifice in a city where food is so scarce. Such is the sisterhood that exists between the mothers in the cooperative.

Between the six Americans, we had several hundred bir that we were able to give Workay. One hundred bir is around seven dollars. And yet, it was enough to buy food for the next several months.

Between the six Americans, we had several hundred bir that we were able to give Workay. One hundred bir is around seven dollars. And yet, it was enough to buy food for the next several months.

Workay shed tears of joy. Not for herself, but for her daughters and her friend Alamsai. All she wants is for her daughters to have a better life than she had. And there is some good news: vision has returned to one of her eyes.

Although she is bed-ridden, she no longer has to work as a prostitute. And Alamsai has money to bring her food, at least for the time being.

The Mothers’ Cooperative is not funded through the student sponsorship program. We are able to fund it only through the sales of the crafts the mothers make, and things that are donated to us that we bring to Africa for them to sell at their store.

We hope someday to be able to sell their wonderful jewelry online, but in the meantime, if you are interested in finding out more about donation opportunities for the mothers, please drop us an email or contact Trish Hack-Rubinstein at (01) 646.567.7672. 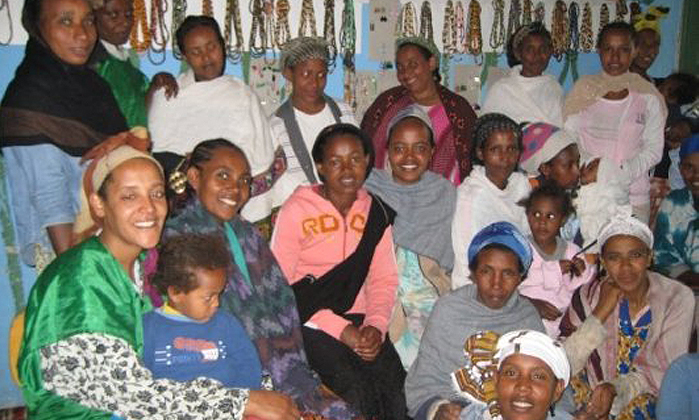 A Real Family, The Sisterhood of the Mothers’ Cooperative

The Mothers’ Cooperative is a large and loving “extended family” for 90 women who have children attending Fresh and Green Academy. They come to the school three or four days a week to take classes in hygiene and child care, and to share their knowledge, wisdom and craft-making skills in jewelry and crochet.

Dressed in traditional clothing (head scarves and shawls), they sit near the edge of the schoolyard, working their crafts, smiling on their children and talking softly amongst themselves.

Each of the women in the Cooperative has their own story of how they came to find their way here, to Addis Ababa and to Fresh and Green. Many of the stories hold the commonality of desperation, prostitution, illness, abandonment and abuse. But they are also stories of hope, inspiration and of a sisterhood that they found in this tiny oasis of education and nourishment in Keteme.

By telling their stories, we hope you will be touched by their remarkable resilience, fortitude and dedication to their children. The Mothers’ Cooperative, started by Muday, is a neighborhood outreach program like no other: it is lifting entire families and an entire neighborhood out of poverty and into a new life full of promise.

The Mothers’ Cooperative is not funded through the student sponsorship program. We are able to fund it only through the sales of the crafts the mother’s make, and things that are donated to us that we bring to Africa for them to sell at their store.

We hope someday to be able to sell their wonderful jewelry online, but in the meantime, if you are interested in finding out more about donation opportunities for the mothers, please drop us an email or Trish Hack-Rubinstein at (01) 646.567.7672. 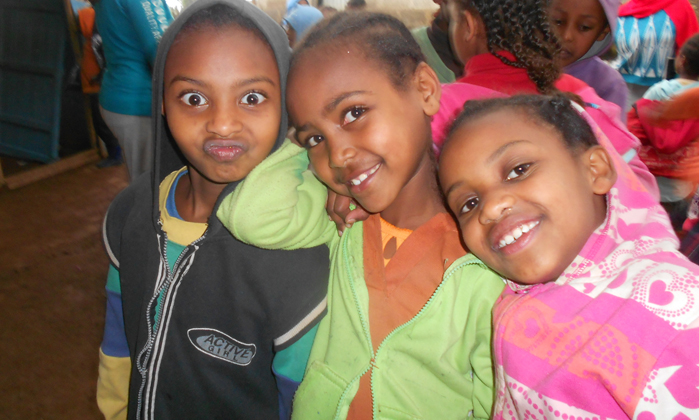 Student Mothers Empowered To Earn Their Own Money 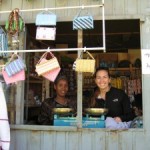 Thanks to your donations and support, there are twenty-two student mothers now earning money courtesy of Fresh and Green Academy in Addis Ababa, Ethiopia. For many, it is the first time in their lives they have been able to earn money by any other means than begging or prostitution. At last, they are able to provide not only for themselves. but for their other children who do not attend Fresh and Green.

Eduction in Ethiopia is free, however children do not receive meals. Therefore, many of our students’ siblings would go hungry were it not for the Mothers’ Cooperative.

The mothers cook the meals for the children and help with the cleaning and upkeep of the school. For the past two years they have been meeting after school in one of the classrooms to make jewelry as well.

Their jewelery has been sold at bazaars locally and we have been able to help them out by exchanging their crafts for donations in the US.

Recently, a donation of a years’ rent for a small store near the school has enabled them to have steady employment. They work in shifts to sell items used by the residents of the neighborhood. The profits, as well as the proceeds from the crafts, are distributed to the mothers equally in salary form.

These amazingly strong and hard working women are overcoming major adversities and finally lifting themselves from the poverty they were born into.

They are an inspiration to all of us.

If you would like to purchase some of their beautiful necklaces, bracelets, earrings, eyeglass holders or watchbands, please email us and we will be happy to get you the information. Their prosperity is only possible through your generosity. Thank you for being a Friend. 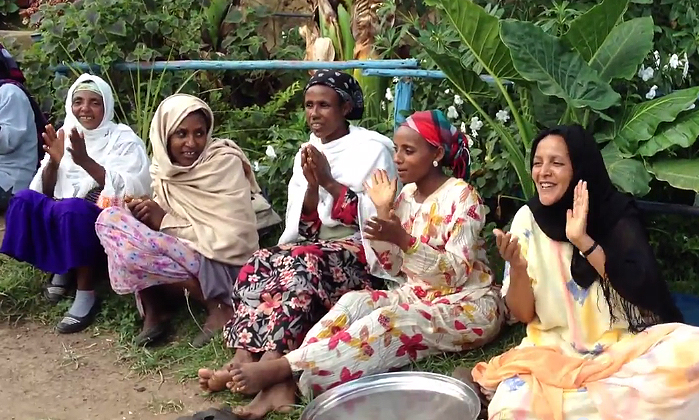 A Mother’s Prayer Inside A Circle Of Gratitude

One of my most profound memories of the trip came at the end of the fourth day. I had been working with the mothers to develop some new jewelry pieces to take back and sell in the United States.

The children had finished their third and last meal of the day and it was growing dark. Time to go home. But first, said Muday, we will pray. Eva, a volunteer on her second visit to Fresh and Green explained to me that the mothers give a prayer of thanks every day after working at the school.

We stood in a circle, the mothers, Muday and five volunteers. The majority of the mothers observe orthodox Christianity, and in unison recited their prayer. Amina, the only Moslem, spoke her prayer softly but clearly. Muday, a Bahai’i, said her prayer of thanks.

And then, one by one, each of us added something in English: a Catholic prayer, a Jewish prayer, a prayer to the Great Mother Earth. Taking part in this circle of gratitude was one of the greatest gifts I received from my trip to Fresh and Green.