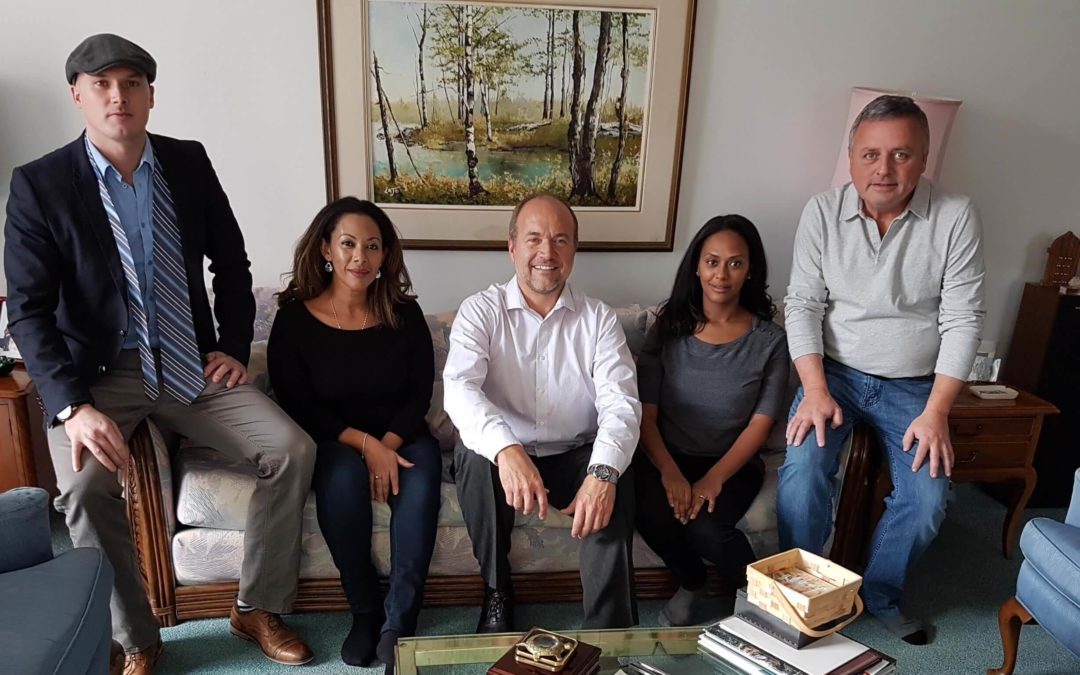 We have great news from Canada as Canadian Friends of Fresh and Green Academy has been granted charitable status. This expands our reach to another 35 million potential supporters and rewards our long-time donors there with a tax credit going forward.

As in the U.S., all of our 5 board members are volunteers and they are supported by even more energetic helpers to promote Muday’s school and Mothers Coop, and many events and fundraisers are in store.

So congratulations to (l-r) Blaine, Rahel, Neil, Tsedey, Paul and Company for their determination and effort to feed and educate kids in Ethiopia whom otherwise might be trapped in the cycle of poverty. You can check out their website here. 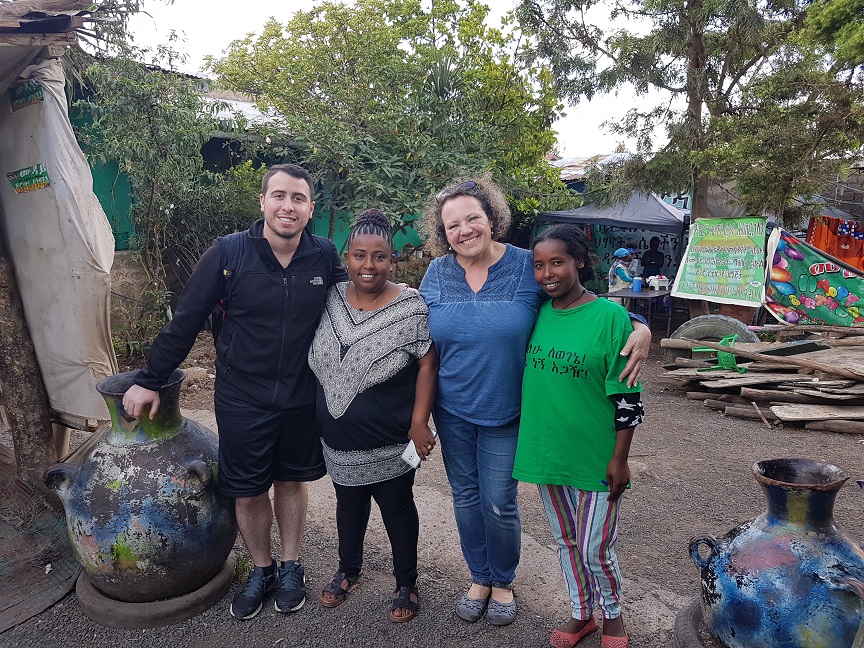 On our third visit to the school this year we had the pleasure of introducing Mr. Christopher Loreck of #Salesforce in San Francisco to our founder Muday and the wonderful community of students, moms and volunteers. This generous new participant, whom we met at #Dreamforce2018 was keen to explore the warm Ethiopian culture and history and made an instant connection with our kids and the people who make Fresh and Green Academy run.

Over the course of a week, Christopher sponsored a student with HIV, also sponsored the single mother Zebib who was our guide in her university pursuits, and came up with an array of ideas to solve our ongoing challenges. And hey, the humble operators who manage the all-powerful Salesforce customer resource management platform at Friends were thrilled to have a Solutions Engineer at their side to pepper with technical questions all…week…long!

We also ran across Cathie Miller, a Canadian nurse practitioner with an adventurous spirit who joined us to get an in-depth look at the school, do some triage (a daily need with 250 boisterous youngsters), and left with stories and scarves to spread to her co-workers and friends. Cathie added a lot of energy to our last day to cap off a great trip, so thanks, guys, for coming to visit!

We encourage anybody who thinks they might like to explore our world, including scaling a 3,000 foot volcano to see the monastery and caldera lake at the top (and getting stuck 4 times on Mount Zuqualla!) to contact us about visiting Fresh and Green Academy. We guarantee it will change your outlook and display the hope and beauty of our planet. 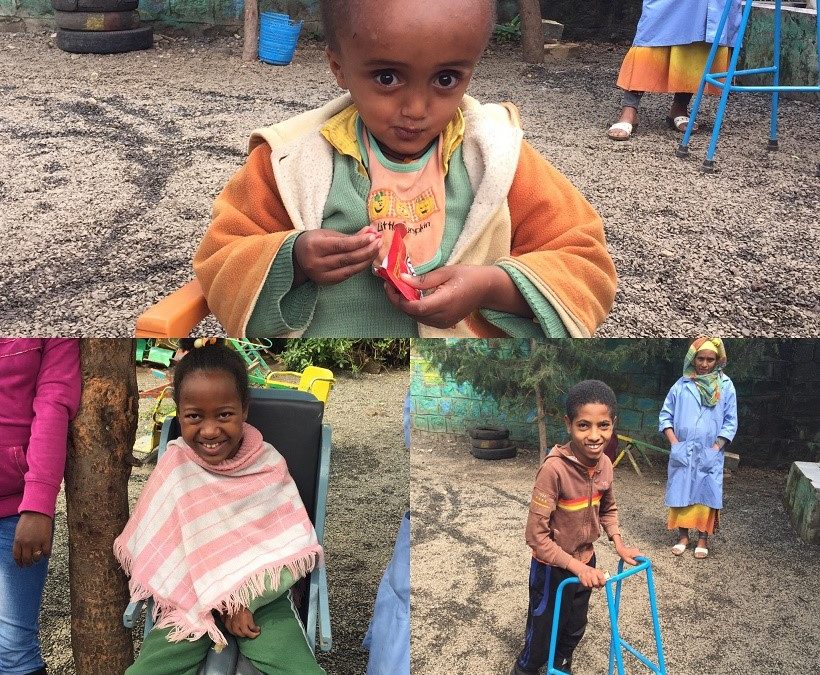 We have some students whose stories Muday could not overlook when they approached the school. Muday created Fresh and Green Academy to help children who need it the most, and that is why these kids were taken into the school, even though they need more resources than normal to succeed. While many of our children suffered in their early years from malnutrition, and the debilities that come with that, several of them faced even more frightening challenges: hydrocephalus, blindness, paraplegia and emotional scars.

A boy named Yesuna was brought to the school because his mother wanted to abandon him. He had been neglected since birth after his mother could not afford to feed him. He was left in their hovel while his mother waited for him to die, and malnutrition made him blind, deaf and unresponsive. He has a severe mental disability. He is too weak to walk or even sit up. But Muday would not abandon him.

Through daily care for over 2 years, Yesuna is coming back. Turns out he is not deaf after all, and responds to music and clapping. His caregivers have applied physiotherapy methods and he now has the strength to sit up on his own. He can now communicate his most basic needs, but cannot speak.

Yesuna has almost constant attention, from his caregivers to be sure, but from his schoolmates as well! A television is kept in his room and his friends come to be with him and watch TV. And this is one of the real benefits of having these students in the community: these kids learn to build people with special needs into their own lives! Everybody lends a hand when needed.

We need your help! Can you help sponsor one of our special needs kids through the Friendship Club program? We have created a special category for this initiative and you will be sure to get progress reports from your Friend along the way.

Sue and James are leading the #RideForThem pack at SoulCycle on West 77th Street to help poor students and their mothers in Ethiopia! Please join us!

The 235 students at Fresh and Green Academy in Addis Ababa, Ethiopia need your help to keep the school running. These kids would likely be on the streets unless they received 3 meals a day and a free education at the school. We also help empower their mothers by giving them a way to leave the streets behind through vocational training to make crafts and food.

Please buy a ride at our website for $100, (or $200 for a front row ride) and you will become a fundraiser getting friends, family and coworkers to sponsor you towards your $500 goal!  You’ll be joining the fun and helping fight poverty and hunger all at the same time!

It Takes a Village Benefit Concert by Zedicus and Abyssinia Roots

The DC area witnessed a great coming together of music and goodwill, to the benefit of the children and mothers of Fresh and Green Academy. Zak Jawad and his band, Zedicus and Abyssinia Roots, played a benefit show April 29th, 2017 at Addia Ababa Restaurant (8233 Fenton Street Silver Spring, MD)

Attendance exceed our expectations, as did the fundraising! The gate was outdone by the generous contributions of many new Friends of Fresh and Green Academy.

Watch this space for more concerts! Come out and here some great music, enjoy some amazing food, and have a wonderful time while helping the kids! If you couldn’t make it but still want to help, you can make a tax deductible donation here! 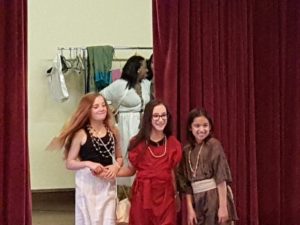 Friends came together for our stunning and exciting #WalkForThem Fashion Show in New York City on May 20th. Our volunteer models, mothers and daughters all, raised nearly $7,000 for Fresh and Green Academy! A great thank-you also for the talented volunteers who put the show together, and of course all of our donors and sponsors who have given us new resources to keep our 235 students in school!

Models proudly showed fashions made by our Mothers Cooperative at the school. Our guests were entertained by Mike DiRubbo’s Jazz Trio who immediately left for a tour of Czech Republic. Patrons were treated to a traditional Ethiopian Coffee Ceremony hosted by Executive Director Sosina Mulugeta Gebreyesus.

If you are interested in purchasing fashions from the Mothers Cooperative, please visit our Etsy store by clicking here.

There is still time to donate to the event. Thanks for supporting #WalkForThem!