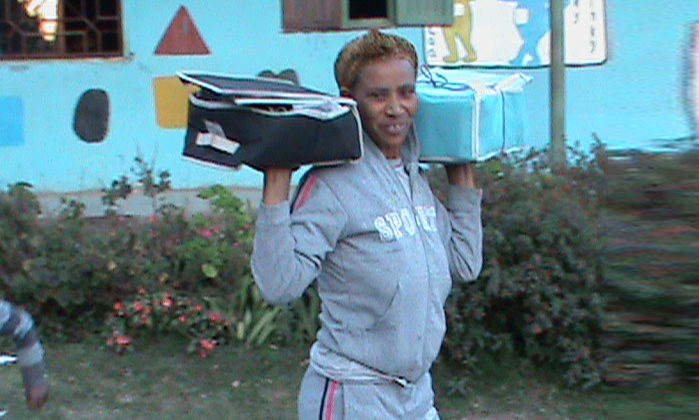 Re posted from the Friends of Fresh and Green blog  http://friendsoffreshandgreen.blogspot.com/

Since this was written we lost another very bright young student. Goday (pictured here) is the mother of one of our students, who recently went to Beirut to work.  Her daughter, Kalkidan, has gone to the countryside to live with her Grandmother and is no longer attending school.

We work hard to help the mothers earn a livable income by selling their crafts but sometimes do fall short.

With your help we can prevent more children from having to leave the school and deter their mothers from falling prey to the allure of a better life that 8 times out of 10 turns out to be a life of slavery and abuse.

You can help by making a donation directly to the mothers cooperative today.

Human Trafficking Hits Home
Being an international flight attendant brings me many opportunities. One being my calling in Ethiopia. Another perk of my job is the exposure I have to a multitude of hotel rooms around the world and in those rooms I often watch CNN International. Currently CNN is running a campaign on stopping human trafficking. I have to admit, I was not aware of the many means humans are trafficked. I was under the impression it was mainly women and children being kidnapped and forced into the sex trade. I have learned that it is so much more than that and that some of our mothers in the “Friends of Fresh and Green Mothers Cooperative” have fallen prey to trafficking.We work very hard to sell the Mother’s goods and we send the group, which consists of fifty women, 100% of the money

We work very hard to sell the Mother’s goods and we send the group, which consists of fifty women, 100% of the money made, but it is still not enough for them to feed their children who do not attend Fresh and Green and themselves and pay the $20-$25 a month rent. So a few of them have gone to work in Yemen and other Gulf countries to work as live-in domestic help. They feel this is the only way to provide a better life for their children, who are left behind in Ethiopia.Unfortunately, four such children have had to leave Fresh and Green to stay with family outside the area of the school. These children may not be attending school or eating regularly the way they were while with us.

Unfortunately, four such children have had to leave Fresh and Green to stay with family outside the area of the school. These children may not be attending school or eating regularly the way they were while with us.
The other major issue with these women leaving is the abuse many suffer.

While I was told stories of abuse I thought they were isolated situations, I did not understand how wide spread and severe the situation really is. Human trafficking is hitting very close to home!

If you would like to donate to the Mothers Cooperative visit our website. We will also be featuring some of the items the mothers create on our site very soon.

Below is an excerpt from a story by Marina de Regt of the Netherlands, that explains the situation well.

Few know about the large numbers of Ethiopian women who migrate to the Middle East to take up domestic work.

“May what happened to me not happen to you,” begins a letter sent to Gebetta, a magazine for Ethiopians in Yemen. Many women have written to Gebetta with testimony of how they were trafficked to Yemen to be employed as domestic workers.They speak of deception, isolation, maltreatment, heavy workloads, unpaid salaries, confiscated passports and physical and psychological abuse. Many regret ever deciding to leave and advise other women not to follow in their footsteps. But the flow of young Ethiopian women desperate to improve their lives and those of their families continues to grow.

They speak of deception, isolation, maltreatment, heavy workloads, unpaid salaries, confiscated passports and physical and psychological abuse. Many regret ever deciding to leave and advise other women not to follow in their footsteps. But the flow of young Ethiopian women desperate to improve their lives and those of their families continues to grow.

Until the early 1990s few Ethiopians – except those of Muslim/Arab origin – were interested in going to the Middle East. After the overthrow of the authoritarian regime of Mengistu Haile Meriam in 1991, Ethiopians were given the right to free movement. Lebanon, Saudi Arabia and the Gulf States have subsequently become major destinations for Ethiopian women in search of a better future.

Even a relatively poor country such as Yemen attracts many female Ethiopian migrants who take up paid domestic work. Changing family structures, the increased educational levels of Yemeni women, the growing number of employed women and changing attitudes towards domestic work explain the increased demand for domestic labour in Yemen.

Socio-cultural constraints prevent Yemeni women from working as domestics – so migrant women meet the demand. Wealthier Yemenis prefer to employ Asian women but middle-class families predominantly employ Ethiopians because they are available and seen as good domestic workers. Somali refugee women also work as domestics but, unlike Ethiopians, do not generally ‘live in’.

Many Ethiopian women come to Yemen on tourist visas and find work via relatives and friends. Those illegally recruited by agents and employed on a contract basis are particularly vulnerable. All of the many recruitment agencies that arrange Ethiopian women’s employment as domestic workers to the Middle East are non-registered, they can be considered traffickers.

Women are approached by the traffickers themselves or are introduced to traffickers through friends, neighbours and relatives. Trafficked women themselves are sometimes even involved in recruiting other migrants. Traffickers are often either of mixed descent – having a Yemeni father and an Ethiopian mother ­– or areYemenis born or brought up in Ethiopia. The Yemeni authorities lack the capacity to control the activities of illegal recruitment agents and it is often the case that traffickers are able to use influence with people in power to ensure that any legal actions against them are halted.

Women who have borrowed money from the agent or broker may end up in debt bondage, required to work long periods before they are able to pay off their debts. Many women have great difficulty leaving their employers and agents and physical abuse is common. Employers and agents often confiscate the women’s passports and forbid them to leave their place of employment unaccompanied.

This makes it impossible for women to look for better jobs, to escape or to have contact with other Ethiopians. Trafficked women may, however, become aware of their rights and decide to run away and find better jobs. Some families therefore prefer to employ young rural Ethiopian women as they are thought to be more malleable and less likely to leave. As a result, traffickers in Ethiopia are purposely recruiting young uneducated women from poor families in rural areas, convincing them with stories about high salaries and educational opportunities.

Please spread the word, tweet and post to your Face Book page. We can not ignore what happens to our fellow humans, we are more connected than we realize.
Tweet