Highlights from April Trip to Fresh and Green Academy 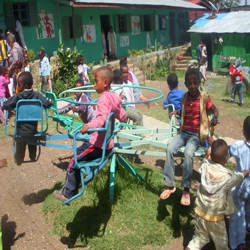 The April trip to the school was a resounding success. Despite the fact that only six of our eight volunteers were able to make it this time (due to the volcano in Iceland disrupting air travel worldwide), the volunteers were able to deliver 12 duffel bags full of much-needed supplies: milk powder, clothing, shoes, toothbrushes, soap and jewelry making supplies for the Mother’s Cooperative.

The children are growing by leaps and bounds thanks to the three meals per day they are receiving. Many of them have lost or are losing their baby teeth, so we were met with a doznes of gap-toothed grins and more hugs and kisses than could be counted.

The highlight of the trip was the outing. We took the chuildren to Addis Ababa’s “Disneyland” for amusement park rides and ice cream! Almost all of the children had never been in a car before, much less the bus that took them, much less the merry-go-round, ferris wheel, giant slide and other rides. As you can imagine, the ice cream was a big hit: none of the kids had ever tasted anything that cold, and they were as astonished by it as they were delighted.

Muday continues her herculean efforts to keep the kids fed and clothed; nurturing their bodies, minds and spirits. The school exists solely because of your donations. Thank you again for being a Friend of Fresh and Green and for making this most recent trip something the children will remember for the rest of their lives.