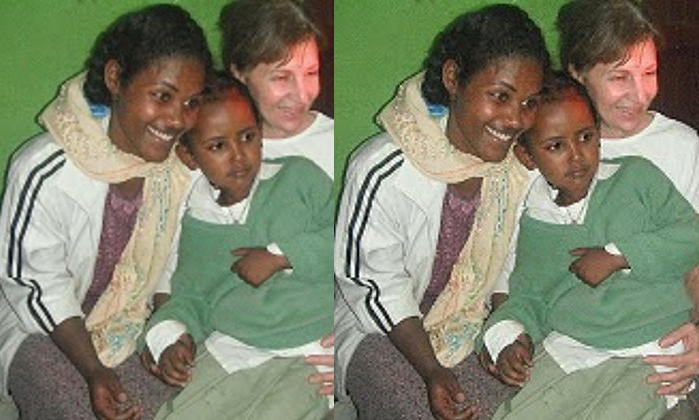 Like many of the mothers in the Cooperative, Almaz left her small village of Zebich for a better life in Addis. She was only 16 years old and grateful for her luck when she found work as a housekeeper for a wealthy man and his family.

However, being hired as a housekeeper did not afford Almaz the independence and opportunity she had hoped, and unfortunately there are many women who still share Almaz’s fate: there are households in Addis where “employee” equals “slave.” Life is lived at the whim of the man who owns you.

For three years Almaz’s employer raped her whenever he wanted. And Almaz became pregnant. When she told him, he fired her.

That was eight years ago. When her daughter Tehetena was born, she kept them both alive by begging on the streets. And the neighborhood grapevine brought them to Fresh and Green, where Muday took them in.

Almaz works at the Mother’s Cooperative and Tehetena is a third grader with a beautiful spirit and a smile that is both shy and frequent. Tehetena and Workay’s daughter Bezewit are best friends, and so the friendship developed between their mothers.

When Workay became too ill to work, Almaz took over the task of feeding her. In the Mother’s Cooperative, they are true sisters and one more example of the miracle that is Fresh and Green.

The Mothers’ Cooperative is not funded through the student sponsorship program. We are able to fund it only through the sales of the crafts the mother’s make, and things that are donated to us that we bring to Africa for them to sell at their store.

We have also opened an online shop if you would like to purchase some of their items, with all the proceeds going to the coop.  If you are interested in finding out more about donation opportunities for the mothers, please drop us an email or contact Trish Hack-Rubinstein at  1.646.567.7672.